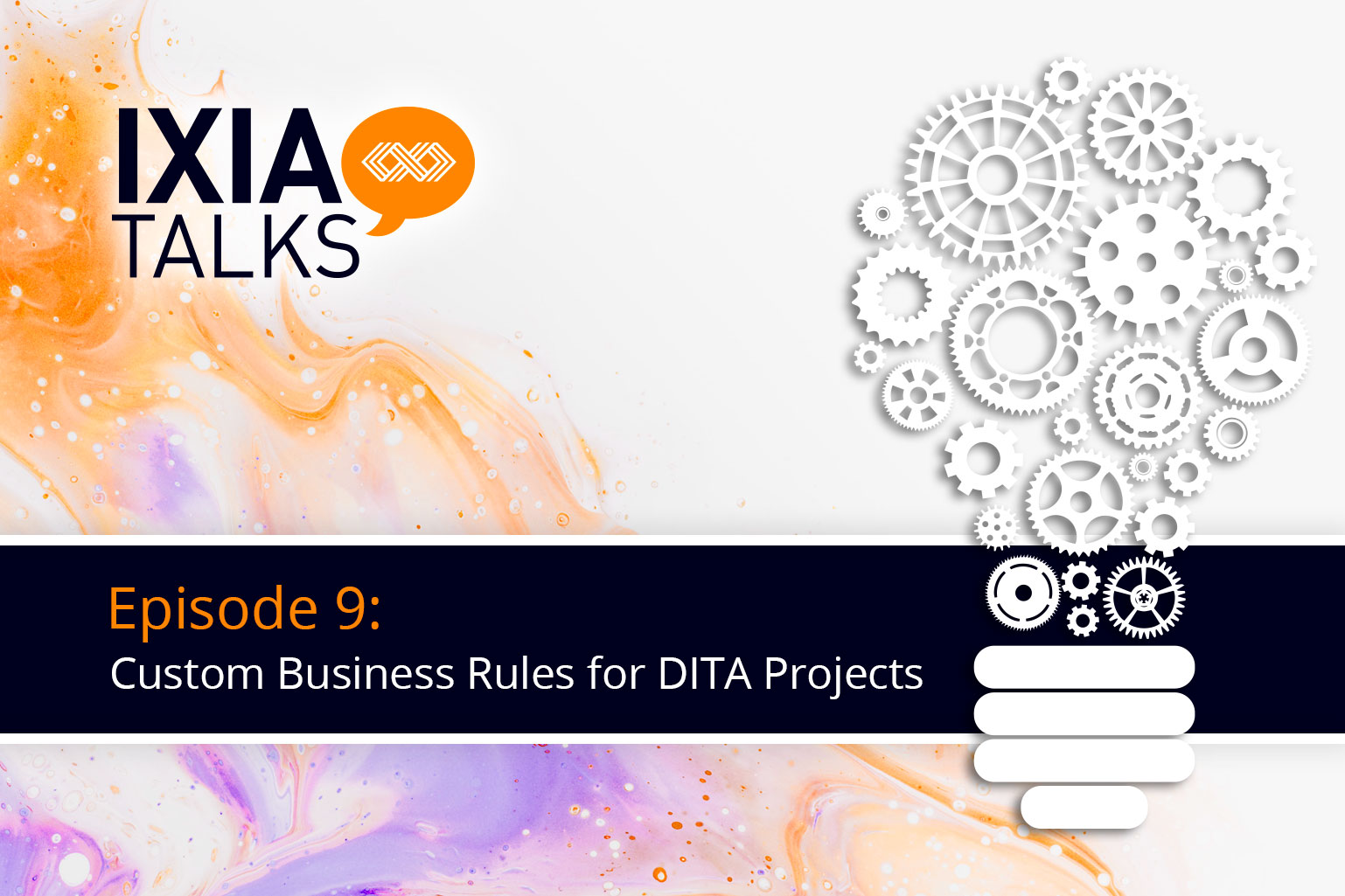 Posted at 09:34h in Uncategorized by Amandine Mondélice

What Are Business Rules

Business rules define or constrain some aspect of business, and always resolve to true or false. They assert business structure or control or influence the behavior of the business. Most importantly, they help a business achieve its goals.

If you’ve worked with oXygen, either on the desktop or within the IXIASOFT CCMS, you might have noticed messages that appear at the bottom of the topic, telling you things like, “Value xyz is not in the set of allowed values defined in the subject scheme…” or “Attribute ‘module’ is not allowed to appear in element ‘p’.” Schematron, working in real time behind the scenes while you write, is responsible for these messages.

These types of errors are structural. That is, they are caused by violations of the DITA structural rules defined in the DITA DTDs. However, there are many other rules that cannot be captured by the DTDs. The four examples above are such rules. There is nothing in the DITA DTDs to require that titles be uppercase, nor is there a way to capture that requirement in a DTD, or any other kind of schema such as XSD or RNG.

You might rely on a style guide and your writers’ memories to enforce these rules, or you might have internal peer reviews or an editor who can correct any deviations from these rules. But wouldn’t it be nice to provide writers with real-time reminders of these rules?

Schematron fits the bill nicely. Schematron is an ISO standard used by hundreds of projects; it’s not unique to oXygen or any other application. It’s a natural language for making assertions in documents. The structural rules mentioned earlier are expressed as Schematron rules but the language is robust enough to express custom rules as well.

Schematron can also be used to verify data interdependency, such as to verify that a start date is before an end date. You can also check data cardinality or perform algorithmic checks. Many industries use Schematron, including finance, insurance, and government. Writers are probably most interested in using Schematron to enforce their style guide rules, although if you work in a highly regulated industry such as healthcare or aviation, you might find that you need Schematron’s data integrity checks as well.

Schematron is actually quite simple. There are five basic elements:

Here is an example of a rule that enforces the rule “Lists should contain more than one item”:

This rule first establishes the context to which it applies: unordered lists, or <ul> elements. Next, the assert tests that the number (count) of items (<li> elements) in the unordered list is greater than one. If the test fails, the error to be displayed is “A list must have more than one item.” In addition to unordered lists, there are also ordered lists (<ol> elements) and simple lists (<sl> elements), so you would need additional rules to cover those contexts as well.

Again, you could write additional rules for other inline styling elements such as <i> or <u> or you could expand this rule to check all three. You could also be more specific with the context, to apply this rule only to topic titles and not to section titles, table titles, or figure titles. If you have worked with XSL or XPath, the syntax of Schematron rules probably looks familiar to you.

To get you started, there is also an intelligent style guide available as an open source project on GitHub: github.com/oxygenxml/integrated-styleguide. It allows you to enforce the rules in the style guide but is also annotated so that you can auto-generate Schematron rules from it.

Generated rules are based on generic rules, which you can create using a library of rules. Generic rules consist of abstract patterns such as

You can also use a chatbot to generate Schematron rules. Natural language statements such as, “Paragraphs should have less than 100 words” can be fed through Dialogflow (software for creating chatbots for websites, mobile applications, messaging platforms, and IoT devices) to create a Schematron rule such as:

Now that you understand what a Schematron rule looks like, let’s look at how you implement them. You can specify a set of Schematron rules to apply to a specific topic by declaring them the rules file and the namespace in the topic itself:

But it’s (hopefully) unlikely you have individual topics or maps that require a unique set of rules; and besides, the approach is not really practical on a large scale.

Within oXygen, Schematron rules are implemented via frameworks. For example, the dita.framework uses several Schematron rules files, including dita-1.2-for-xslt2-mandatory.sch, dita-1.2-for-xslt2-other.sch, styleguide.sch, and accessibility.sch. To expand on these rules, you can create your own oXygen framework that uses rules in addition to these, or even instead of these.

Identifying issues via Schematron business rules is important but even more important is resolving those issues. That’s where Schematron Quick Fixes (SQF) can come in.

The assertion message alone (such as “p should contain a maximum of 100 words”) is not always enough to help the writer find and fix the problem. If possible and logical, you should also provide some proposals or suggestions to help the writer–similar to the way that spellcheck offers suggested words when it finds a misspelling.

Generally, an XML expert–someone who knows the XML structure inside and out creates Quick Fixes that help a Subject Matter Expert (SME)–who knows the content but is naive about XML–find and fix the problem. The XML expert’s work can create a much less frustrating authoring experience for the SME and enable him or her to simply get on with creating the content.

SQF is an extension of the ISO Schematron standard; that is, Quick Fixes are an extension of Schematron rules. Even if you are using an application that doesn’t recognize the solution, you can still use the business rules. The Schematron Quick Fixes specification is still in draft with the W3C, so if you decide to use it, you can offer feedback at schematron-quickfix.github.io/sqf.

Similarly, you can use SQF to convert text links to xref so that they are clickable, or to add missing cells to tables. There’s really no limit to the solutions you can provide with SQF.

You can also add SQF options to ignore errors found by the business rules. Obviously, you would only do this for rules that can be optionally applied, where the rule is mainly informational.

This blog was originally presented as an IXIAtalks webinar by Octavian Nadolu and Sydney Jones. You can find the webinar here.