The “D” in DITA stands for “Darwin,” underscoring the fact that the XML standard has evolution built into its design. That evolution continues with several new offerings expected soon from the OASIS Technical Committee in charge of the standard, including the various flavors of Lightweight DITA, multimedia extensions to DITA 1.3, and the upcoming DITA 2.0 standard.

About Creating an Open Standard

Creating an open standard is not a quick process, and should definitely not be confused with that of a software development environment. In the case of the DITA standard, it is mediated by OASIS (Organization for the Advancement of Structured Information Standards), which is a “non-profit consortium that drives the development, convergence and adoption of open standards for the global information society.” Within OASIS, the driving force for the development of the DITA standard is the DITA Technical Committee (DITA TC), which holds weekly conference-call meetings. Its members are composed mainly of consultants who work with clients who use DITA, representatives from firms with substantial DITA implementations, and from software firms who create tools for use with DITA. The most recent version of the DITA specification is version 1.3, which was originally released in December 2015 and was followed up with an errata release just under a year later. DITA 1.3 comprises several new features, including the troubleshooting topic type, key scoping, branch filtering, and a number of smaller changes from the previous version.

The Development and Audiences for Lightweight DITA

The DITA TC is host to several sub-committees (SC), one of the most active being the Lightweight DITA SC. One of the criticisms often leveled at DITA is that it is too complicated for occasional authors to easily use. Lightweight DITA (LwDITA) seeks to strip down the DITA element set to a bare minimum. The other chief design goal of LwDITA is to have it no longer rely exclusively on XML-based semantics, freeing DITA for use in other data models such as HTML5 and Markdown. The idea is that this will open up the DITA model and its ability to share reusable, structured content across additional audiences, including marketing communications, engineering departments, and other groups for whom “full DITA” is overkill.

The Markdown version of LwDITA, known as “MDITA,” is garnering considerable interest in the software development community, where Markdown is used extensively. Many software developers who are recent graduates have little to no direct experience with XML constructs and are more familiar with other formats, such as Markdown and HTML. The initial release of LwDITA will be a Committee Note that describes all of its elements and attributes. The intention is to follow this with a second Committee Note describing the mechanism for template-based specialization, designed to make the customization of extended LwDITA elements easy. A formal LwDITA specification will conclude the process, though the Committee Notes ought to provide sufficient information for users to start creating LwDITA content.

Another effort parallel to LwDITA is to bring HTML5’s multimedia extensions to DITA. Originally, this was part of the LwDITA proposal; then, the DITA TC realized the oversight in not including this in the original DITA 1.3 specification. The plan is to incorporate HTML5 multimedia elements for embedding audio and video files to DITA 1.3 as an add-on rather than wait for inclusion in DITA 2.0. Like LwDITA, the HTML5 multimedia extensions will be published in a Committee Note, along with the supporting DTDs so tool vendors and XML editors will be able to incorporate it into existing DITA 1.3 content.

While much of the first year after the release of DITA 1.3 was spent crafting the first errata version of the specification, the focus has subsequently turned to DITA 2.0. This release is not intended to be backwards-compatible with previous versions of DITA, though current developments have been conservative, focusing primarily on reducing a number of largely unused features rather than adding new ones. 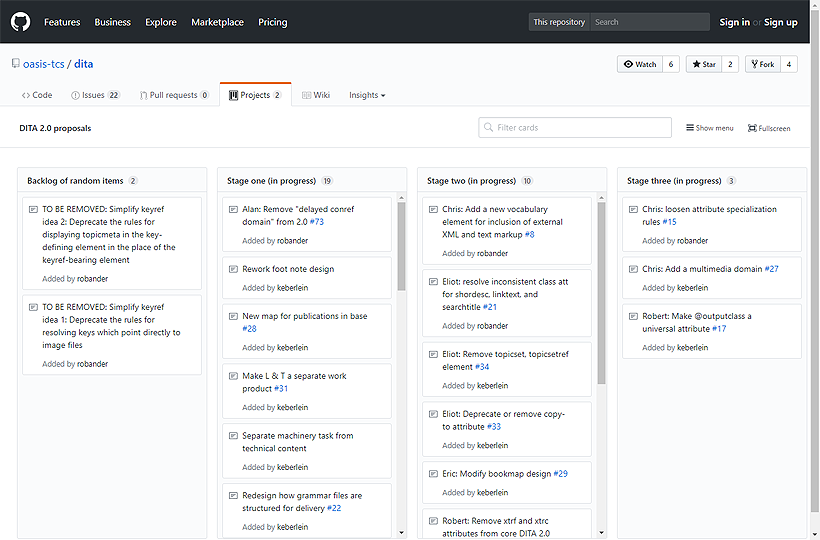 A screenshot of the publicly available DITA 2.0 Proposal Staging Area on GitHub.

One of the reasons for the lengthy, five-year development process from DITA 1.2 to DITA 1.3 was a greater emphasis on properly vetting additions and changes to the standard, a process that continues with DITA 2.0. Proposals for DITA 2.0 undergo a triage process, where members of the DITA TC propose feature changes or additions. This process is hosted on GitHub and, while you have to be an OASIS member to be part of the discussion of these feature proposals, it can be viewed here, in keeping with the policy that all OASIS Technical Committee proposals be visible and transparent.

From here, the new standard will be assembled, and publicly reviewed. Once the specification is completed internally and ready to be approved, there’s another roughly nine-month process to get it through the OASIS pipeline to make it official.

While it is safe to say that the release of DITA 2.0 will not happen anytime soon, the changes that LwDITA and the multimedia extensions will bring are likely to spur additional interest in DITA, in particular the ability to extend DITA’s content reuse mechanisms outside of its XML roots. It is also worth pointing out that DITA 2.0 will not automatically render previous content developed using DITA 1.x (including LwDITA) obsolete. If you are looking to move to DITA, there is no time like the present.