The Past, Present, and Future of DITA 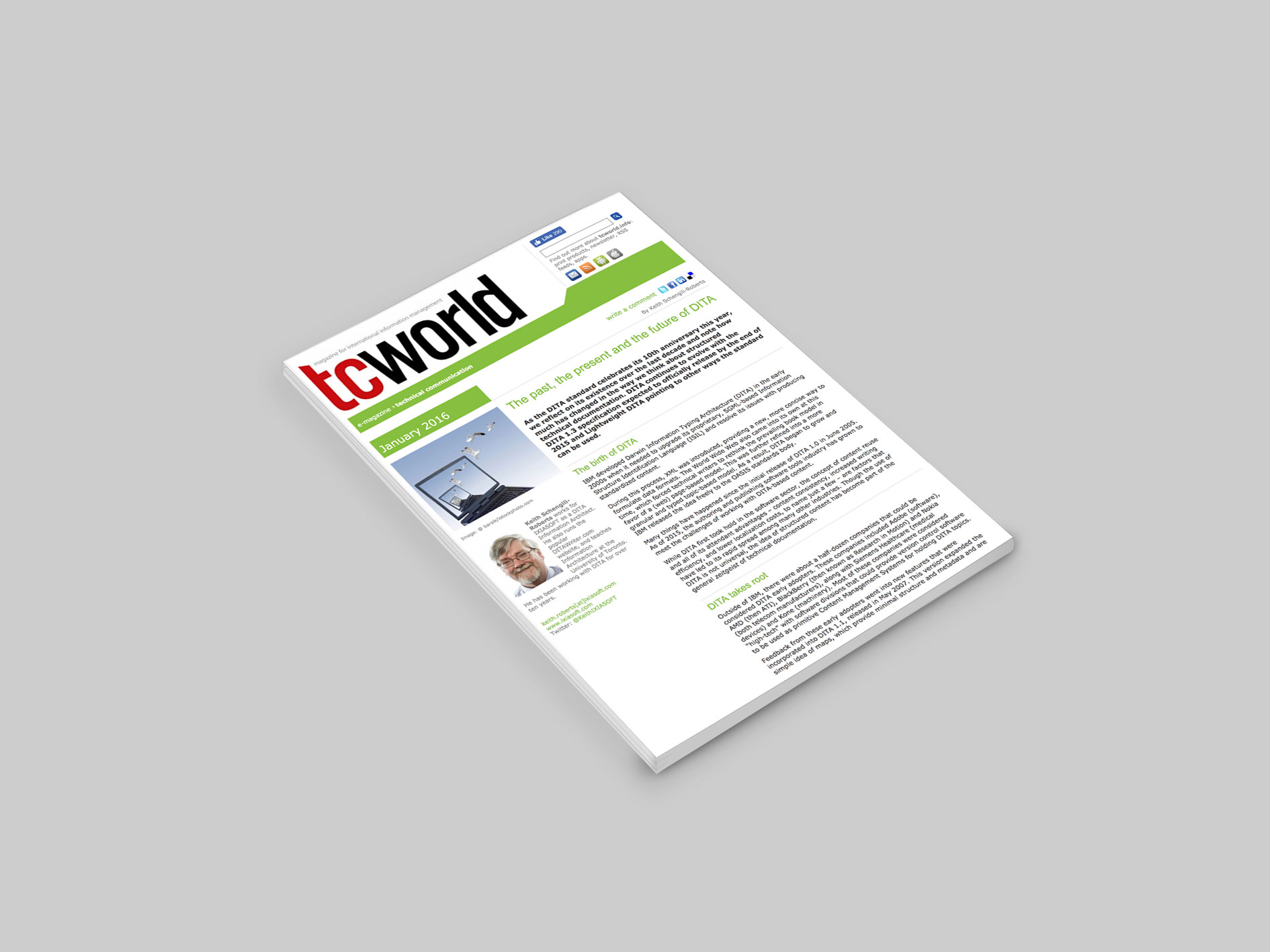 01 Jan The Past, Present, and Future of DITA

Posted at 13:23h in Uncategorized by Sydney Jones

As the DITA standard celebrates its 10th anniversary this year, we reflect on its existence over the last decade and note how much has changed in the way we think about structured technical documentation. DITA continues to evolve with the DITA 1.3 specification expected to officially release by the end of 2015 and Lightweight DITA pointing to other ways the standard can be used.

The Birth of DITA

During this process, XML was introduced, providing a new, more concise way to formulate data formats. The World Wide Web also came into its own at this time, which forced technical writers to rethink the prevailing book model in favor of a (web) page-based model. This was further refined into a more granular and typed topic-based model. As a result, DITA began to grow and IBM released the idea freely to the OASIS standards body.

Many things have happened since the initial release of DITA 1.0 in June 2005. As of 2015, the authoring and publishing software tools industry has grown to meet the challenges of working with DITA-based content.

While DITA first took hold in the software sector, the concept of content reuse and all of its attendant advantages – content consistency, increased writing efficiency, and lower localization costs, to name just a few – are factors that have led to its rapid spread among many other industries. Though the use of DITA is not universal, the idea of structured content has become part of the general zeitgeist of technical documentation.

Outside of IBM, there were about a half-dozen companies that could be considered DITA early adopters. These companies included Adobe (software), AMD (then ATI), BlackBerry (then known as Research in Motion) and Nokia (both telecom manufacturers), along with Siemens Healthcare (medical devices) and Kone (machinery). Most of these companies were considered “high-tech” with software divisions that could provide version control software to be used as primitive Content Management Systems for holding DITA topics.

Feedback from these early adopters went into new features that were incorporated into DITA 1.1, released in May 2007. This version expanded the simple idea of maps, which provide minimal structure and metadata and are primarily useful for online outputs, to that of bookmaps, which provide extensive book-specific metadata along with organizational elements such as chapters, appendices, parts, tables of content and so forth. It also introduced DITAVAL, used for conditional processing based on assigned attribute values, which allows, for example, generating a different manual for specific audiences or for the details of various operating systems.

Momentum for DITA continued to build, primarily within the high-tech sectors. By 2008, these included software firms like Algorithmics, BMC as well as Business Objects and Sybase (both acquired by SAP), among others..

Later that year, this list began to diversify, with firms emerging from other sectors: semiconductor firms such as Freescale and Qimonda were now using DITA, along with FamilySearch, Kongsberg Marine and salesforce.com. By 2009, a number of consulting firms catering to firms wanting to move to DITA appeared, such as Innovatia and Scriptorium, joining the ranks of long-established structured authoring consultancies like Comtech in the United States or Mekon in Europe.

More tool vendors began to appear on the scene, such as Syncro Soft with their oXygen XML editor supporting DITA with version 9.0 by late 2007. Version 8 of Adobe’s FrameMaker, also released in 2007, included full DITA support. During this time period, other companies such as Antenna House, IXIASOFT, Schema, and XMetal became early supporters of the standard by developing DITA tools and solutions that would give end users more options for using DITA within their organizations.

The translation firm SDL started significant involvements in DITA during this period, first investing in Trisoft in early 2008, followed by Idiom soon after, and acquiring XyEnterprise a year later. Just five years after its release, these tool vendors knew that DITA had become a significant force in the technical writing community.

Five years after the initial version of DITA was released, the DITA 1.2 specification came out in December 2010. The development of DITA 1.2 within OASIS was somewhat chaotic, with a number of incomplete proposals approved, with the dependencies of elements within some sections not being recognized until the final stages, and with much of the weight of the process falling to only a few OASIS Technical Committee members to review. The number of DITA tags available for use ballooned significantly, adding to the perceived complexity of the specification. One commentator summed up the new standard in one word: “messy”.

While the process that led to the DITA 1.2 specification may have been less than perfect, a number of significant new features came with it, including:

Arguably the most significant feature within the DITA 1.2 specification was the indirect linking via keys. Keys allowed content creators to assign a “name” to a reference. Now, instead of referring to a specific object (topic, image, map, etc.) by its filename, a content creator could refer to the assigned name, or key, instead. This indirect way of referring to content was not only a convenient feature for writers, but also significantly enhanced the portability of content, as it was easier to update a single key reference to an object than changing all the URIs if the object was moved or renamed. The feature also enabled more sophisticated conditional processing, further promoting content reuse.

But it took significant time for features such as this to gain significant traction. This was due in part to the specification’s greater focus on software tool developers, making it harder for DITA content creators to fully understand what many of the new features were intended to do. It also took a while for many software tools to become fully DITA 1.2 compliant. By late 2013, roughly a third of all DITA XML editors listed on DITAWriter.com were not fully DITA 1.2 compliant. While lack of full tool support likely hindered the wider adoption of features specific to DITA 1.2, most of the information architects and content creators who worked with DITA for five years are aware of its benefits.

What to Expect with DITA 1.3

Considering the problems that plagued the development and launch of the DITA 1.2 specification, the OASIS DITA Technical Committee took steps to make the process of creating the DITA 1.3 specification easier. Additions to the developing specification now went through a three-stage process. Approval of an initial proposal was the first step, followed by approval of the overall design of the idea, with the hurdles set higher than for DITA 1.2. If an idea passed the second stage, it went through a final edit round and was added to the draft specification.

The goal of this revamped process was to ensure full oversight of all possible dependencies between one idea and another. The members of the DITA Technical Committee also cleaned up the wording of DITA 1.2 material incorporated in the updated DITA 1.3 specification, with a clear focus on consistency, style and terminology, and, in some cases, re-writing existing sections for greater clarity. The new specification is supplied in three separate versions, designed to make it easier for software vendors and users to focus on portions of the standard for their specific needs. As of the time of writing (late-September 2015) DITA 1.3 is in final draft stage and is expected to officially launch by the end of this year.

DITA 1.3 offers many new features. Some of the more significant ones include:

These features, along with a number of other additions, represent a significant update to the existing specification, greatly extending what is possible with DITA. There are signs that tool vendors are more likely to be quicker on the uptake with DITA 1.3 than they were with DITA 1.2, with Syncro Soft’s oXygen XML editor including aspects of DITA 1.3 piecemeal since January 2015, and JustSystem’s XMetaL editor already claiming DITA 1.3 compliance. DITA 1.3 has been five long years in the making, but it has been worth the wait.

The Future of DITA

One thing we can be sure of is that there will be no DITA 1.4. All of the DITA 1.x versions have been backwards compatible with one another, ensuring that content created using DITA 1.0 can still be used and operated with the same behavior within a subsequent DITA specification framework. Kristen James Eberlein, chair of the OASIS DITA Technical Committee, officially stated that DITA 1.3 will be the final DITA 1.x release, and that the subsequent release, DITA 2.0, will not be backwards compatible. It is too early for specifics regarding DITA 2.0, but it has been hinted that the focus will be on the base DITA architecture rather than on specialized vocabulary. This means, reworking the fundamentals of how it works rather than adding new tags and attributes.

OASIS is also working on an interesting offshoot of mainstream DITA known as “Lightweight DITA” (LwDITA). The goal is to strip DITA down to its fundamentals, providing a down-sized version for those who do not need all of the features of the full DITA 1.3 specification. For example, at the moment a standard paragraph in DITA can include up to 60 specific tags, allowing content creators to add everything from blocks of code, notes, hazard statements, syntax diagrams, menu cascades, UI controls, etc. Lightweight DITA would bring that number down to nine, supporting a more restricted but straightforward set of tags (e.g. standard inline formatting elements, link addition, image and phrase insertion).

Lightweight DITA is not designed to replace the full specification, but instead allows DITA to be adopted by a broader range of applications, both within and outside of the traditional technical content community. A good example of this is the recent implementation of Lightweight DITA using Markdown – a simplified language used for producing HTML – instead of XML tags, which helps non-content creators to contribute DITA content in a simplified, forms-based way. Another focus of Lightweight DITA is to expand its use outside of technical communication (e.g. new topic types specifically for marketing departments).

Over the past ten years DITA has grown significantly in popularity. It has evolved and become a very flexible tool helping technical communicators to make their processes more efficient. Thus it seems very likely that DITA will be around for another ten years and beyond.